East High Through the Years

In the 1908 Iowa Supreme Court decision that ratified the consolidation of the district it states, “Prior to May 21, 1907, there were 5 independent school districts wholly within the corporate limits of the city of Des Moines, and 12 such districts partly within and partly without said limits.” By 1907, the year voters in Des Moines approved the merger of the East Des Moines School District and the West Des Moines School District, other suburban school districts had either merged with the East District or the West District, the Des Moines River serving as the general boundary dividing the two, or were affiliated with them, using the high schools in these two districts for their students.  It needs to be noted that the name West Des Moines in 1907 referred to the area of the city that lay west of the Des Moines River to 63rd Street. The West Des Moines of today was originally called by its railroad name, Valley Junction.  In 1937 the suburb voted to become West Des Moines.

The school merger was a major topic of discussion on both sides of the river in 1907.  For a time, both school boards of the East and West school districts wavered in their support of the merger.  Numerous articles in the Des Moines Register & Leader during the last part of April and through the vote in May describe the change in attitudes.

The East school board was the first to come out in favor of the merger, while the West board originally came out against it.  A May 12, 1907, article printed an open letter to the West school board from Drake University President Hill M. Bell, who stated, “It is the good school, not the poor one, that justifies the levy of taxes.  A successful business man will always pay a little more for a good article, knowing that in the end it is the cheapest, as well as the best.”  The citizens in the West District were worried that their taxes would go up with the merger, as they felt the East District buildings were in need of great repair.  President Hill went on to state that, “It is certainly futile to think of a great city here if one portion of it selfishly ignores another portion; and I submit to you that selfishness is the only consideration that would permit the people of any district to use their influence against consolidation and a Greater Des Moines school system.”

As the days drew nearer to the vote, the newspaper reported upbeat articles that predicted a victory for one district.  A May 14 headline for an article stated that and ex-board member of the West District “says he is willing to wager all kinds of hats and cigars that the vote will be heavy.”  He would lose that bet. As in recent school-related elections the voter turnout was quite low, with only 4,000 or so citizens voting.  This compared with 11,236 votes cast in the 1906 gubernatorial election.   According to the newspaper, the merger of the districts fell out as follows: East – 2,146 for and 196 against; West – 932 for and 747 against.  Documents obtained from the archives of the Iowa Supreme Court state the final “for” vote tally was 3,081 and the final “against” tally was 952, or a total of 4,033 votes cast. The day after the election, Wednesday, May 22, 1907, marked the beginning of the district known today officially as the Des Moines Independent Community School District, or Des Moines Public Schools/DMPS.  Dissatisfied parties challenged the vote, and in 1908 the Iowa Supreme Court ruled the new district as official.

As the city grew to the east, west, and south, it became apparent that new high schools would be needed.  East High moved from its first high school-only building at E.12th and Court Avenue in 1911 to the present building on E 13th Street in a procession led by Principal May Goodrell.  The students carried their books, loaded all school furniture onto trucks or horse-drawn wagons and fell in behind Miss Goodrell and the GAR color guard.  They marched up E. 12th Street from their old building to cheering crowds lining the streets, turning onto E.13th and placing all the furniture, books, and records into their new building, the present EHS.  School continued on for the rest of the day, and that became the origin of East’s long-standing tradition of Class Day, where alumni gather to celebrate their high school days, have a banquet, and give out scholarships to graduating seniors.

We have the right to fight for East High

Our gallant team will always try 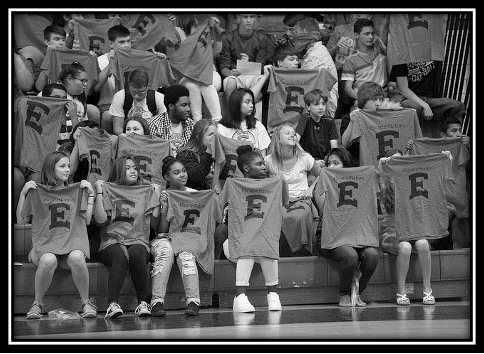 To be the best team in the nation

Although the odds are sometimes high

We have the Black and Red tradition

A cheer for East

Dear East High you are the school for me 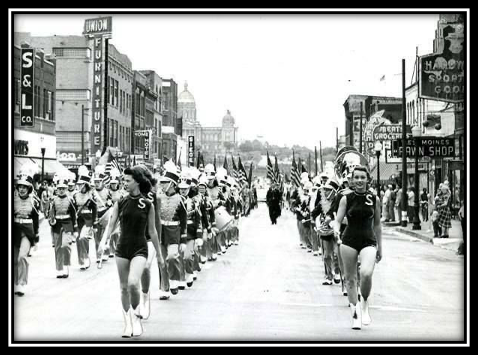 You will always win the victory

Red and Black to you we’ll be true

And we will bring great honors to you

Hip Hurray here’s to the Black and Red

O’er the world your fame is widely spread

Onward we will do or die

The following is a chronology of the development of East High School:

Additions were completed in 1955 (Gym Wing)